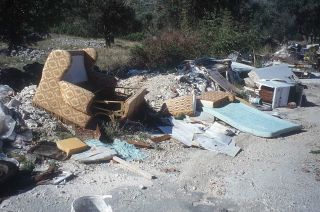 Landfill is the oldest waste disposal method and is still common throughout the world. Often landfills are established in abandoned quarries and mines. Though landfilling of waste can be done successfully, it can also lead to windblown garbage, vermin, and leachate that pollutes groundwater. Landfills also create methane, though this can be tapped as a fuel source. It has become difficult in many areas in Canada to establish landfills, as the land is more valuable for other purposes and neighbourhoods are often strongly opposed to landfills.

Incineration involves the burning of waste. Incineration occurs on the small scale in many Canadian backyards and on the large scale in industry and in many towns. Incineration can also be used to generate electricity and heat however most of the energy is lost to the atmosphere. Incineration creates toxic gasses and ash which must then be disposed of. Toxic emissions include dioxins and mercury compounds, both very harmful to the environment.

Waste reduction can involve the compaction of existing waste, but increasingly involves resource recovery. This includes reusing and recycling. Recycling is also known as secondary resource recovery. Recycling involves the reprocessing of material that would otherwise be considered waste. The most commonly recycled materials are aluminum, plastics, papers, and cardboards. On problem with recycling is that in many markets virgin resources are actually cheaper than the recycled alternatives. However there are significant environmental savings to be realized through recycling. Recycling can be conducted by getting consumers to separate their waste or the recyclables can be separated out later. The former is growing more popular as indicated by the success of “bluebox” programs.

Organic wastes, including our sewage, is typically composted or digested. Technologies vary widely, but the general goal is to eliminate pathogens, physically break down waste, and produce soil and clean water. These methods almost always involve aerobic and anaerobic bacteria as a breakdown agent. Until recently composting has been largelyan individual undertaking, but “green bin” programs are being initiated in many areas. The soil produced from such projects can be sold at a profit.

Go to the Resources page.

Go to the Case Studies for waste management.