Our most recent HEAD Talks release, The Bigger Picture, complements our research on energy, one of the Solutions Agenda theme. The Bigger Picture is based on a study conducted by Kennedy, Krahn, and Krogman (2013, Egregious Emitters: Disproportionality in Household Carbon Footprints) and explores the relationships between household income and greenhouse gas (GHG) emissions. The figure below graphs the data from the original study, which shows a clear, direct relationship between income and emissions. What the trend implies is that households with greater income are more likely to engage in behaviours that contribute to higher GHG emissions, such as purchasing larger houses, taking more flights, buying (and frequently driving) more cars, and acquiring more material goods. However, on the flipside of the coin, previous research has found that higher incomes also can correlate with pro-environmental behaviours. Our challenge then is to address this paradox from a systems perspective and rethink the way our communities are designed so that emissions of all community members are reduced, from the low and high emitters. 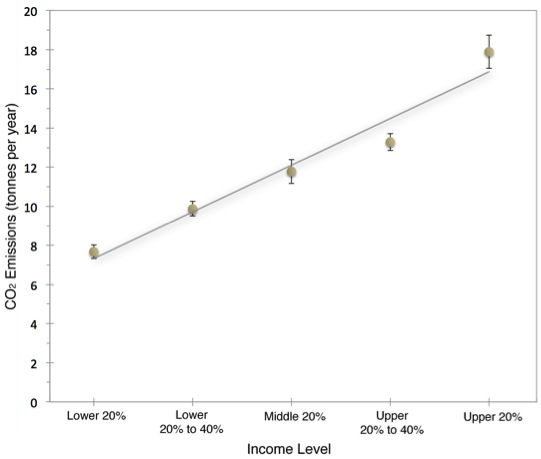