A new national survey shows nearly one fifth of the country's power is provided by facilities fully or partly owned and run by Indigenous communities. The author of the report, Chris Henderson, says the real surprise for him is the amount of employment that clean power is creating — 15,300 direct jobs for Indigenous workers who have earned $842 million in employment income in the last eight years. There are now 152 medium to large renewable energy projects with Indigenous involvement. That's up from approximately 20 projects in 2008. And T'Sou-ke First Nations is the only community in Canada that is completely solar powered. 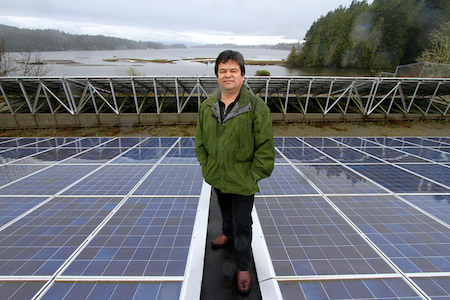 T'Sou-ke Chief Gordon Planes amongst a sea of solar modules on the canoe shed on Vancouver Island. Image by David Dodge via Flickr.