In November 2021, in under a week, extreme rainfalls created extensive flooding in parts of southern BC. The once-in-a-100 year flood, one of the worst floods to strike BC since the 70’s, forced over 20,000 people to evacuate, killing livestock, livelihoods and ruining homes. The extreme flooding, although tragic, is not unexpected. Climate change and the low-lying nature of the Lower Mainland B.C. makes it a high-risk area for extreme floods. Since 2016, experts have been predicting impactful extreme floods and the possibility of BC diking failure. Further, many of the Provincial and Federal government policy decisions, such as dismantling the Federal Flood Damage Reduction Program (FDRP) in 1975 and removing provincial BC flood experts, has increased extreme flood impact.

In the past, the FDRP coordinated the provincial and federal flooding strategies, defining flood-risk areas, and limiting their development. Since the removal of this program, development decisions have been put in the hands of local government leading to the over-development of flood-risk zones, reducing natural permeability, and increasing flood risk. Further, many of the flood risk experts have been removed from the BC government, taking with it municipal guidance and flood expertise for local municipalities. Now, municipalities are limited in both budgets and flood knowledge, leading to large variations in flood risk management across BC. These factors create a perfect storm for extreme flooding in BC, contributing to both the tragic flood, seen today, and the vulnerability for future extreme floods.

By Alexandra Wright. Alexandra holds a Masters in Public Administration from Queen's University and is currently completing her Ph.D. in Health Policy from the University of Toronto. As part of her Ph.D., Alexandra is in the process of concluding her research into flood policies and learning opportunities in two case study communities, one in Alberta and one in British Columbia. For more information, contact Alexandra at alexandra.wright@mail.utoronto.ca. 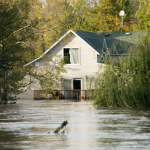