Over the last few weeks, we’ve shared some positive news on different initiatives tackling the massive amount of plastic pollution that is clogging our oceans. And while there are plenty of positive stories about progress, two alarming studies just cannot be ignored.

In 2015, the Ocean Cleanup Foundation commissioned an expedition for scientists from around the world to study the eastern part of the “Great Pacific Garbage Patch”. After cataloguing over one million pieces of plastic, mostly microplastics, they discovered that this infamous region in the North Pacific Ocean is 16 times larger than previous estimates. Occupying a 1.6 million square kilometre area, it contains over 79,000 tonnes of ocean plastic according to this CBC report. Their samples included a variety of plastic objects (containers, straws, plastic lids, bottles, ropes, fishing nets, buoys, etc.) that had been accumulating for years; some even dated back to the 1970s and 1980s. They also discovered that 10-20% of the plastic debris they collected came from the 2011 Tsunami in Japan. However, they were surprised at how much fishing and aquaculture are contributing to the problem in addition to land-based sources of plastic waste. They recently published their results in Scientific Reports. 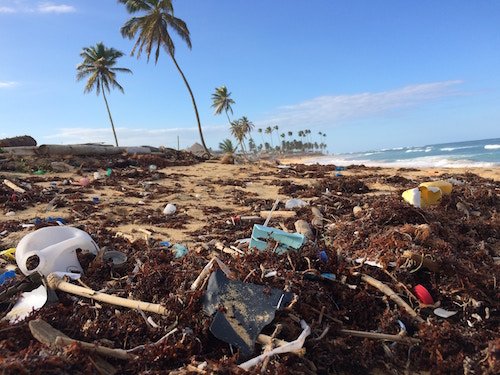 Photo by Dustan Woodhouse on Unsplash

The River Tame near Manchester is also in rough shape. A team of scientists from the University of Manchester discovered that it has the “highest microplastic pollution yet discovered anywhere in the world” with over 500,000 microplastic particles per square metre, according to this Guardian article. They also analyzed sediments in 10 rivers near Manchester. They discovered that 39 of the 40 sites, just 40 km away from the city, were contaminated with microplastics. They collected more samples after the winter floods of 2015-2016 and found that 70% of the microplastics had been swept away with 17bn headed towards sea water. Ultimately, their research revealed that a major contributing factor to ocean plastic pollution originates upstream in river catchments.

While these are fairly grim reports, such research is motivating many companies, big and small, to help clean up their act when it comes to ocean pollution. We recently discovered that Adidas sold 1 million pairs of sneakers made from ocean plastic in 2017 after collaborating with Parley the Oceans. According to this Green Matters article, the shoe giant committed to cleaning up toxins in their shoes and preventing ocean pollution a couple of years ago. To walk the walk, they stopped using microbeads, switched from plastic to paper packaging, and even released a new line of running shoes that are made from plastics and fishnet fibres. They’re also working on switching over to 100% sustainable cotton by this year. There’s still a lot of work to be done, but this shows that many apparel companies are taking a step in the right direction when it comes to finding sustainable design solutions.