This study investigates a local sustainable development initiative to establish a pedestrian zone within a Canadian urban community. This community-based initiative used social capital to overcome campaign obstacles and the campaign itself generated new social capital within the neighbourhood through the creation of adaptive networks of participants. The basic research finding was that a core/periphery network structure formed within the group over time as predicted. This structure provided stability for the network, and little evidence of “core burnout” was found. The campaign succeeded in creating a part-time, pedestrian-only space that serves as an educational example of change for sustainable community development that is replicable in other communities, and provides an example of alternative occupation of community space. The network continues to expend a large amount of effort and time on fund-raising; the presence of a critical source of available economic capital might be critical to long-term success and network sustainability. 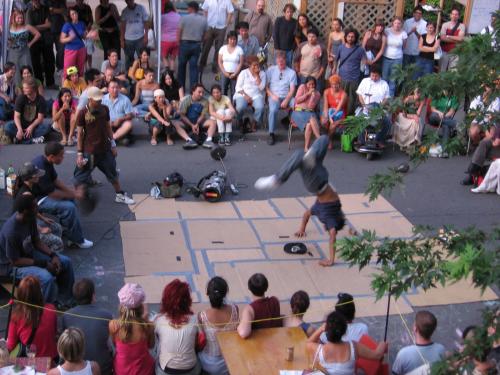 The Kensington Market area of Toronto, shown above, is bounded by four major arteries which carry streetcar lines: Spadina Avenue, Bathurst Street, College Street, and Dundas Street. Within the market the narrow streets contain t-junctions that slow traffic. Rent has traditionally been low, and the lot size is very small, leading to a high population density and concentration of two story buildings. Usage is highly mixed; row housing coexists with converted heritage homes housing retail on the ground floor and residences above. The mix of services in the market and the vibrant street life draw traffic from outside of the market area. Despite the construction of two municipal parking garages, the market’s narrow streets are often gridlocked with traffic.

Streets are for People and PS Kensington

In 2002, a group of people interested in questioning the narrow traditional limits of acceptable street use threw a party advertised as “Streets are for People”. They rented several parking spots, put chairs in the street, and invited a Samba band to play. The party gathered enough attention from passersby that it spilled into the rest of the street, people wrote detour markings on the pavement, and drivers had to detour while that block became an impromptu street party. The success of the event motivated the organizers to repeat and expand their efforts the following year. Realizing they would need to organize more formal closures with city permission, they formed a more group called PS Kensington. That fall, PS Kensington worked with the Ontario chapter of the Sierra Club to organize a Harvest Festival with street closures through much of the market on Carfree Day 2003. The event was well received by the community, which lent critical momentum to the efforts of PS Kensington. 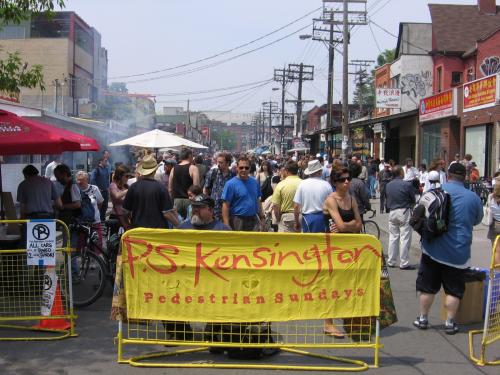 The following winter, the newly-formed group began seeking city council support for a broader car-free Kensington project. They were asked to demonstrate support from the local merchants, so they sought assistance from a sociology professor with public polling expertise to create a poll to gauge local public opinion. They were able to gain and demonstrate support for a test project of 14 consecutive pedestrian-only Sundays in most of Market, which they dubbed PS (Pedestrian Sunday) Kensington.  They also ran into their first difficulties with the city; the city only recognizes a car-free area as a “special event”, requiring barricades, police, marshals, and a strict "no bicycles" rule.  This added to the cost and planning required for each event. The PS Kensington days included live bands, public debates, blind taste-tests, performers, skateboard competitions, merchants moving their wares out onto the sidewalk, and public art.

The first summer of PS Kensington was very well attended, and apparently highly successful. The project, however, suffered a serious setback when the city conducted its own mail-out survey to gauge local community response and only drew a few negative responses. The city curtailed funding of the project, but community outcry convinced the city to allow a limited repeat of the previous events. The number of events was scaled back from fourteen consecutive Sundays to four alternating Sundays, to allow the organizers time to fund raise in between the events the approximately $2500 needed per event.  The events were again activity-filled and heavy with pedestrian traffic, and this success allowed the organizers to secure funds for summer 2006.

The efforts of this group may be roughly categorized into efforts spent overcoming the obstacles of government inertia and unhelpful regulation, and efforts organizing the pedestrian events.  The concept of a car-free street does not exist in the Ontario Highway Traffic Act, and the City of Toronto only allows car-free streets as a “special event street closure,” requiring barricades, signs, marshals ensuring no one rides bicycles, a vote of approval from the full city council, and annual budget approval.  Organizers discussed dealing with government overregulation as the most tiring and difficult part of their work, which they addressed with little outside help. Organizing and experiencing these events, however, provided motivation and positive feedback to the Streets are for People network, which in turn attracted larger numbers of participants and peripheral volunteers who strengthened and expanded the primary organizers' personal networks.

The Streets are for People leaders uniformly believed their efforts had been successful, expressing that they have been guided by their community and feeling they have made a positive contribution socially and environmentally.  They report no feelings of burnout or waning interest after three years of organizing, although they hope to soon make PS Kensington self-sustaining so they can start working on car-free initiatives elsewhere. 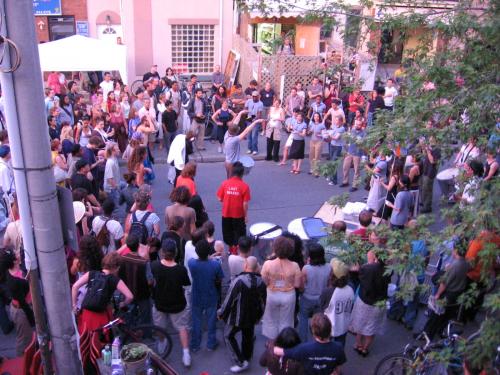 The car-free markets are

The car-free markets are still going in 2007, once a month on Sundays. New this year, there are also car-free markets in Mirvish Village and Baldwin Street, on side-streets with retail outlets. Details at www.pskensington.ca.

The City of Nelson has a vibrant market community. We have a dedicated market area in a park that holds the Saturday Markets as well as a carfree market on Wednesdays in town on the main street which blocks off one block from vehicles. There is also Marketfest which occurs on the last Sunday of June, July and August which shuts down two blocks of the main street and hosts over 100 vendor and has three music stages. Just a regular weekend in Nelson.

The markets are run by our local Eco Society http://ecosociety.ca/markets-festivals who have worked tirelessly to maintain these amazing market opportunities. They experienced similar issues with permit requirements and getting businesses support. The Wednesday market changed locations each year for the first three years but now it is going into its third year occupying the same block. It is becoming a mainstay for residents. They expect and plan to have the market set up on Wednesdays and plan their shopping around it. Everyone knows to come early because produce is often sold out by the early afternoon.

I am not sure of our City's level of support for the markets, if the get permit breaks or funding. If they do, it is not advertized. It does really take a group of dedicated people to make these markets happen. However, they should be a priority and market spaces should be a part of city planning.

Many people wanted to walk

Many people wanted to walk along the Carfree Markets, there are some country that held a Carfree Markets, (e.g)Mirvish Village and Baldwin Street. There are a lots of retail outlets there. By the way , Thank you for sharing such a informative idea.