With the ratification earlier this month of the Paris Agreement countries of the world have officially embarked in a global race to implement ambitious climate policies that contribute to reducing green-house gas emissions at the planetary-scale. If Canada wants to shine in 2020, domestic climate policies must rapidly be adopted to accelerate the low carbon transition.

In this context, Sustainable Canada Dialogues (SCD) – a network of 60+ scholars from across Canada – produced a progress report on Canada’s climate actions over the past year. We analysed climate decisions made in Ottawa in 2016 in relationship to the 10 policy orientations that we proposed previously in our position paper entitled Acting on Climate Change: Solutions from Canadian Scholars. 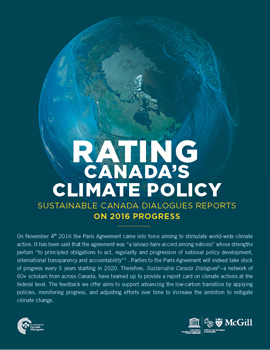