How can Canadians be better motivated to take more action on biodiversity? A group of 20 prominent Canadian women in science and conservation are answering that question in a new report released on Monday which calls for action by all Canadians to reverse critical species loss.

Biodiversity Conservation: A Call for Action for Canadian Decision-Makers argues that a loss of species is hard to notice if you can’t name the different plants or animals in your own backyard. It suggests new strategies for teaching Canadians about nature: designing cities with natural connections and using new technology and the arts to talk about protecting our lands, waters and wildlife.  It also includes bold asks for policymakers, like the creation of new protected areas, more partnerships with Indigenous peoples and enforcement of species at risk legislation.

This bilingual report was drafted after Professor Ann Dale of the School of Environment and Sustainability led a 4-part conversation series exploring biodiversity conservation with members of Women for Nature of Nature Canada. Hosted on her e-Dialogue platform, Changing the Conversation, it was designed to increase civic awareness, engagement and literacy on the importance of biodiversity conservation in Canada. Bringing together female researchers, practitioners and civil society leaders from diverse sectors, they discussed strategies and identified concrete actions to tackle biodiversity loss in Canada.

As stated in the media release, “the latest evidence on biodiversity loss worldwide makes it clear that we must act now to avoid unimaginable natural poverty,” said Women for Nature co-chair Ann Dale. “There is no second chance from extinction. Can you imagine Canada without polar bears or loons? This action agenda is our chance to make a difference”.

Please help us make a difference by sharing it widely among your networks. 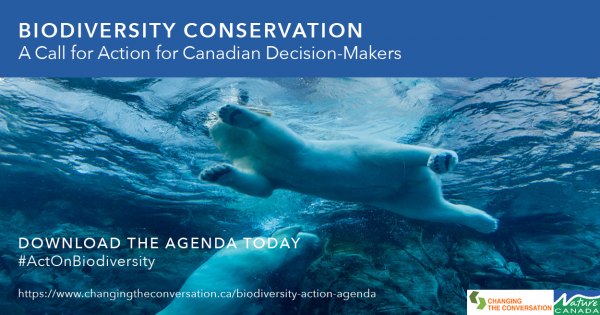