Climate change is expected to increase the frequency and intensity of extreme heat events according to last year’s Intergovernmental Panel on Climate Change report. City-dwellers are particularly at risk during heat waves as vast swathes of concrete surfaces absorb a tremendous amount of heat. This results in what’s known as the urban heat island effect. After a series of heat waves swept across North America, the roofing giant, GAF, was inspired to find a tangible solution to reduce surface temperature and increase community well-being. The solution is a paint with an additive that reflects infrared light, known as solar reflective paint. So far, the GAF Cool Community Project has painted 1 million square feet of roads, playgrounds and parking lots throughout Los Angeles with solar reflective paint. While most of the surfaces are painted with a light grey solar reflective paint, it also comes in a multitude of other colours. In fact, the initiatives commissioned an artist to paint a series of colourful murals throughout L.A. communities. One of which depicts a timeline of annual temperature change in L.A. County from 1895 to 2021, highlighting the effects of the climate crisis.

In Pacoima, L.A., the solar reflective paint has already cooled concrete surfaces by 10 to 12 degrees. While the data is anecdotal, GAF will continue to collect weekly data on surface temperatures to understand the measurable impacts of solar reflective paint on heat waves and communities. As Vice President of Corporate social responsibility and sustainability at GAF, Jeff Terry told Fast Company, “The ultimate goal is not just to lower the ambient temperature of the community but to see how it impacts the livelihoods of people in the community. 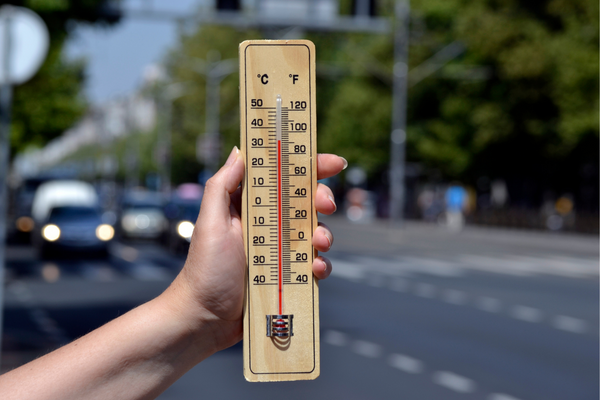 Photo by Magdevski from Getty Images/Canva